“I’m really looking for therapy to be a safe space for me; just a good non-judgmental place to explore myself. But also, I didn’t really connect well with my last therapist because I didn’t feel that they were very open. You know?”

As far as first impressions go, whenever I hear this sentiment from a new person coming into my practice, my first thought is: “oh, do I know… and you’ve shared more about your defensiveness than you probably intended.” And it is almost as if an imperceptible boxing bell dings somewhere between us, and another fated first round begins a minute past the hour.

I know what is implied, though not directly stated, and that is that defensive if hostile lines have already been drawn by the person wanting a safe space. On my end, I know by conventional definitions that a safe space is a place where a person isn’t under attack, isn’t in harms way, and won’t suffer discrimination. In truth; I don’t technically disagree. However, a person can feel discriminated and disbelieved in the most banal of standard assessment questions, can feel under attack when challenged to try something a different way, or they can feel harmed when destructive and abusive behavior are not co-signed. It is a tricky initial moment, because even exploring what a person means or truly wants when they’re making that statement may be felt as an attack or critical of that desire.

It is a request, yes, but also a statement that what they would want, they also might not be able to accept, and are likely to sabotage.

When a person says they don’t want judgment, I also hear an anticipatory resistance, in that they may have a difficult time accepting all kinds of judgment, including the judgment of respect.

Loosely speaking, having someone else explore your world and your thoughts and your feelings, can feel implicitly unsafe. Sharing one’s innermost thoughts and feelings to another person has an intrinsic vulnerability, so it makes sense that there would be some degree of fear and uncertainty about being safe in that moment. Maybe more unconscious fear is felt that cannot be articulated, because, “you know.” In truth, I don’t quite know what it means for another. I do know that safety is consciously felt, but unconsciously confirmed, when a person is guarded and defensive.

It is a curious thing then, a classic psychoanalytic encounter getting deeper into conscious and unconscious material, wherein a person wants to be understood, but guardedly and defensively doesn’t want there to be a process to understand or for there to be a process to relate. This shows up when a person wants to be heard, and yet, when evidence of listening is presented, often in the form of identifying incongruent thinking, hearing opposing motivations, or noticing incompatible goals… rather than exploring that, a person can become defensive at the slightest hint of being seen. It is an offense-as-defense tactic that would argue that I, the shrink in the room demonstrating my desire to understand them, also is proving that I do not understand them. When, in truth, my own attempt to explore how those incongruent thoughts might make sense for them, how those motivations might have a unifying core in their personality, or to try to more clearly see them in their goals, is an act of connecting; connecting therefore breaks the illusion that connection magically happens.

The work of connecting to a person might also feel like disconnection. Further along, other than desiring connection, there is also a fairly common assumption of what constitutes judgment in that opening stance. That is, the only judgments that would count as judgment for them are probably disrespect, worthlessness, wrongfulness, or simply hate. There is a double-bind in that narrow definition; since those are the judgments that counts as judgment, someone worried about being judged will look for those judgments and also be more inclined to interpret interactions through that narrow definition. More loosely, this typically looks like a person quick to deem others as, “always having to be right,” but somehow seem to erase moments when another person genuinely agrees with them, as if those moments don’t count as judgment, and the judgment of respect. This is all a long and roundabout way for me to say that when a person says they don’t want judgment, I also hear an anticipatory resistance, in that they may have a difficult time accepting all kinds of judgment, including the judgment of respect, esteem, validity, worthiness, and also, at its core, the deepest judgment of yes: love.

A safe space isn’t an unspoken agreement to always agree with another person, and create a frictionless echo chamber; though many people would believe it were only that. The belief that there is also safety, not in guardedness, but in that fantasy of conflict-free if seamless agreement, well, that’s another defense guarding a deeper fantasy of how relationships operate. More casually, a person who believes that way has probably never felt respected by someone who also disagreed with them, so a disagreement must be disrespect, so it all would feel judgmental and unsafe. To be in disagreement with one’s therapist, for some, can feel like a deeper betrayal of trust because the stakes are even higher and the expectations even greater; the fantasy of a mythic safe space must be persevered at all costs, and the fantasy can’t be wrong, so it must be another that is wrong. In this problematic if formulaic instance, it is the therapist alone that cannot make the person feel safe, so the therapist must not be open, must not be connecting, must not be providing the safe space. That a therapist, alone, is responsible for a person to feel safe, is a lovely fantasy, and I wish that were the case and it were that easy. Truly.

In a different world, if a person came to see me and said, right out the gate, without any defensive posturing, that they simply struggle with trusting and are scared of getting close to anyone, I wouldn’t hear a harsh boxing bell go off in my mind. I’d hear them, listening to the sound of their uncertain exhale and that start of a careful new breath, and feel an instantaneous respect and immediate compassion for them, as if a softer bell was humming somewhere close. I’d also try my best to not let them be alone in that moment. 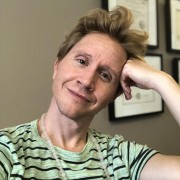 I'm a Licensed Marriage and Family Therapist in private practice down in the greater Long Beach, CA, area. I've been in the mental health field, formally, since 2005, and I consider it a deep and rewarding honor to see other people grow and live the lives that they want. If I'm not sitting on a couch with a cup of tea in hand, I'm probably on my bicycle, or lost in my own thoughts on the beach; meditating, tweeting, blogging, and talking into a video camera are also known to happen.